These days drones come in all shapes and sizes and the smallest of all are known as nano-sized.

Nano drones are perfect for pretty much anyone because they are inexpensive to buy, are small enough to fly in any indoor space, and are easy to fly for young and old.

It’s pretty hard to beat the fun you can have flying a nano drone indoors with friends and family!

Here’s our list of the best eight nano drones of 2022!

Why Nano Drones are a Great Purchase

Nano drones make an excellent gift for yourself or someone who wants to try flying a drone without investing hundreds of dollars.

They are designed to be beginner-friendly, so anyone can get flying in just a few minutes.

Features that Nano Drones Have to Help Beginners!

Learning how to fly your nano drone can be tricky, but most of them have great features that can make it a lot easier to learn how to fly!

Check out our article on how to fly a drone here to learn more about how yaw and other things work on a drone.

This Nano drone from DRONEEYE has everything you need to fly in one package. It has 3 different flight speeds, altitude hold to help new pilots keep the drone flying at a stable height, and one key take-off and landing. Basically, it’s really easy to fly! 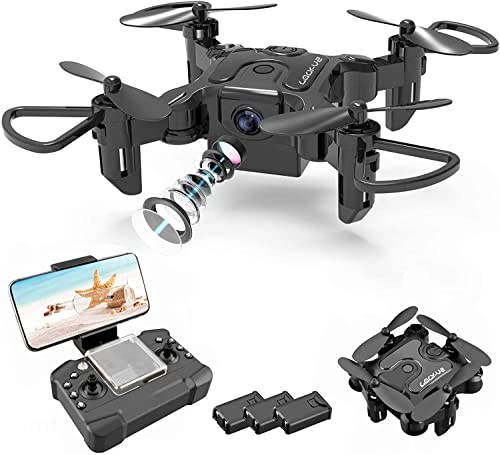 For a bit more money you can get the same drone from DRONEEYE with a basic camera. Check out both the standard and the camera versions below.

SYMA is well known for making toy grade drones and their SYMA X20 is the perfect example of a nano drone. It is cheap, easy to fly and lots of fun! 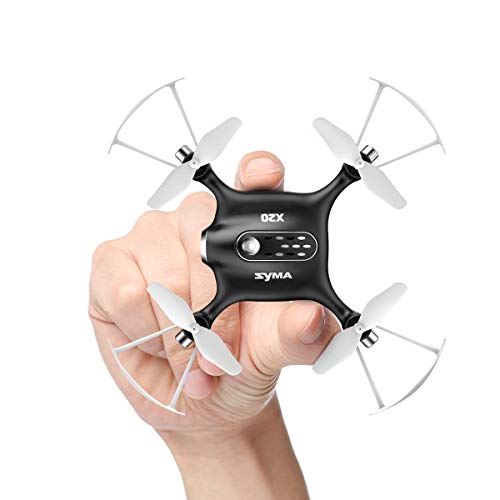 It has the usual things to help beginners like altitude hold, one key take off/landing and headless mode. A huge pro for the SYMA X20 is that it comes with guards around the propellers making it safer to fly indoors around people and pets.

The biggest downside of the SYMA X20 nano drone is that it uses an internal battery. That means that every time you fly the drone you are going to have to charge it up before flying again.

Cheerson is another nano drone from another well known toy grade drone company and their Cheerson CX-10 is almost the cheapest nano drone we could find on the market. 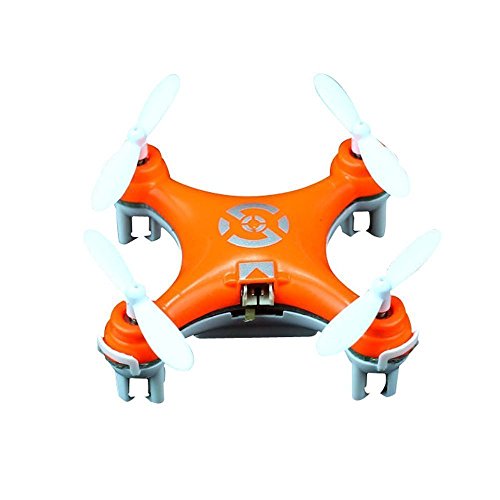 The radio controller it comes with the CX-10 is very basic, but it will do the job.

This is about as basic as you can get in the nano drone market. It’s great for people who have a spare $20 and want something to fly around the living room.

There are a couple of downsides of this nano drone. The CX-10 doesn’t have altitude hold, so it’s a little harder to fly for beginners. There are also no external batteries, so you need to charge the drone for every flight.

The Hubsan X4 has been a favourite nano drone for beginner pilots for years.This nano drone is harder to fly than others because there are no altitude hold or one key take off/landing features. It’s great beginners who want more of a challenge, but still want to start out with something small and cheap. 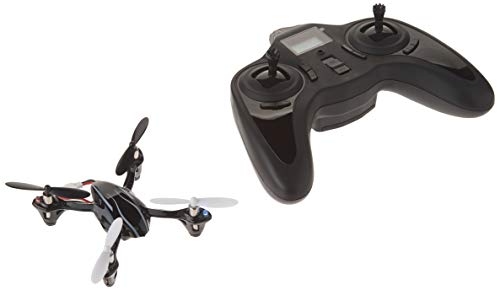 The main weak point of the Hubsan X4 is that it has an internal battery that needs charging between flights. Hubsan is known for making great toy grade drones, so if you can overlook the internal battery we think this is a great option for aspiring drone pilots.

This one is probably better for kids over the age of 12 because of the lack of altitude hold and one key take off/landing.

This nano drone from Hilldow has all the features you could ever want in a nano drone. It has all the great beginner features like altitude hold, one key take off/landing, headless mode, 3 flight speeds and guards around the propellers. 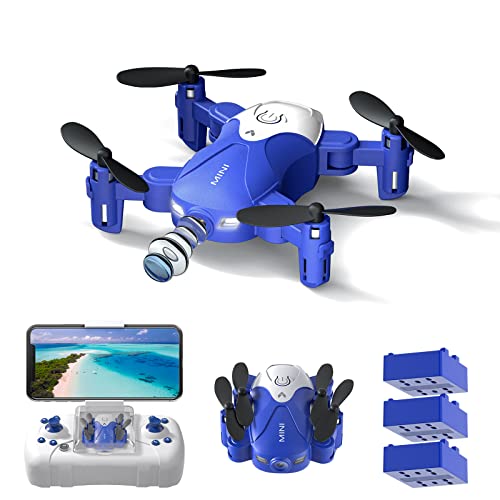 It has a basic camera which can be used to record video and even fly the drone in the First Person View (FPV) mode using phone and WiFi. It’s not going to capture amazing footage or anything, but it’s a great introduction to drones, filming and FPV all in one cheap package.

The best thing about the Hilldow nano drone is that it comes with 3 batteries, so it’s perfect for people who just want to keep flying over and over.

This is another cheap and very basic nano drone like the Cheerson CX-10 we covered above. 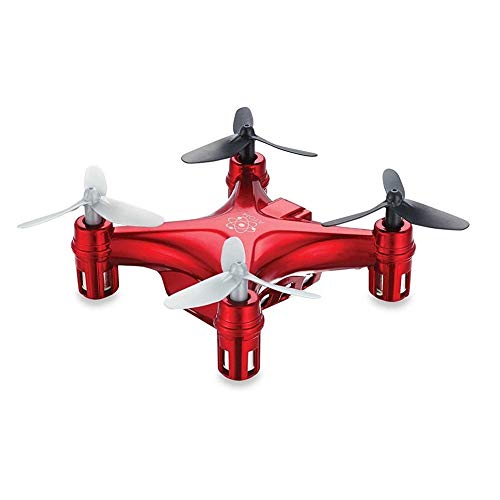 It doesn’t have altitude hold and uses a basic radio to control the drone. There is an internal battery that will need to be charged for every flight. It is basically exactly like the Cheerson drone but slightly cheaper.

Get this drone if you love a bargain!

The Sky Viper Dash is an extremely well made nano drone. It was specifically designed to be an easy drone to fly indoors. It has all the features you need like altitude hold, one key take off/landing. 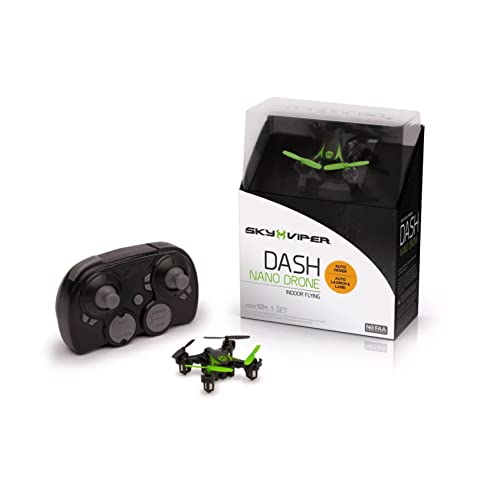 What sets it apart from other nano drones is its dual flight mode feature. In Auto mode the drone will assist you with altitude hold. In Manual mode it will be up to you to use the throttle stick to control the height of the drone yourself. This makes it a great option for people who want to quickly advance their drone flying skills without having to buy a new drone.

The biggest downside of the Sky Viper Dash is that it uses an internal battery, so it would need to be charged up before every flight.

This drone isn’t technically a nano drone, but we couldn’t resist including it here. Don’t worry, it’s still pretty small! GoolRC has cloned a design that has been popular for years with their T36 mini drone. This style of drone is known as a whoop and is popular in the hobby of FPV drones. 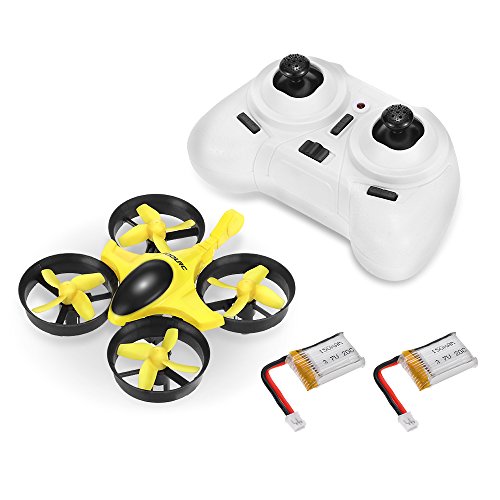 The GoolRC T36 lacks a camera that makes FPV possible, but like normal whoops it has ducts around the propellers to give a high level of safety and durability in crashes.

This drone has altitude hold and a one key return to home feature, making it great for people who want a larger more powerful nano drone that is still easy to fly.

Here’s a handy chart for comparing all the Nano Drones in this article!

We were really excited to research and write this list for you. All of us on the EasyDrone team started with nano drones similar to these and we think it’s the perfect way to get into the drone flying hobby.

If you just want the cheapest nano drone we think the Cheerson nano drone is a great option.

We think the best overall nano drone is the Sky Viper Dash drone because it is well made and has the bonus dual flight mode feature to help you become a better pilot.

Let us know which nano drone you decided to buy in the comments below. Be sure to let us know if we missed your favorite nano drone in our round-up also!

Our names are Tristan and Josh, and we have a goal! We want to get everybody flying a drone, and make that experience as easy as possible. If you're looking for something in particular, type it into the search bar above!

EasyDrone is a participant in the Amazon Services LLC Associates Program, an affiliate advertising program designed to provide a means for sites to earn advertising fees by advertising and linking to Amazon.com